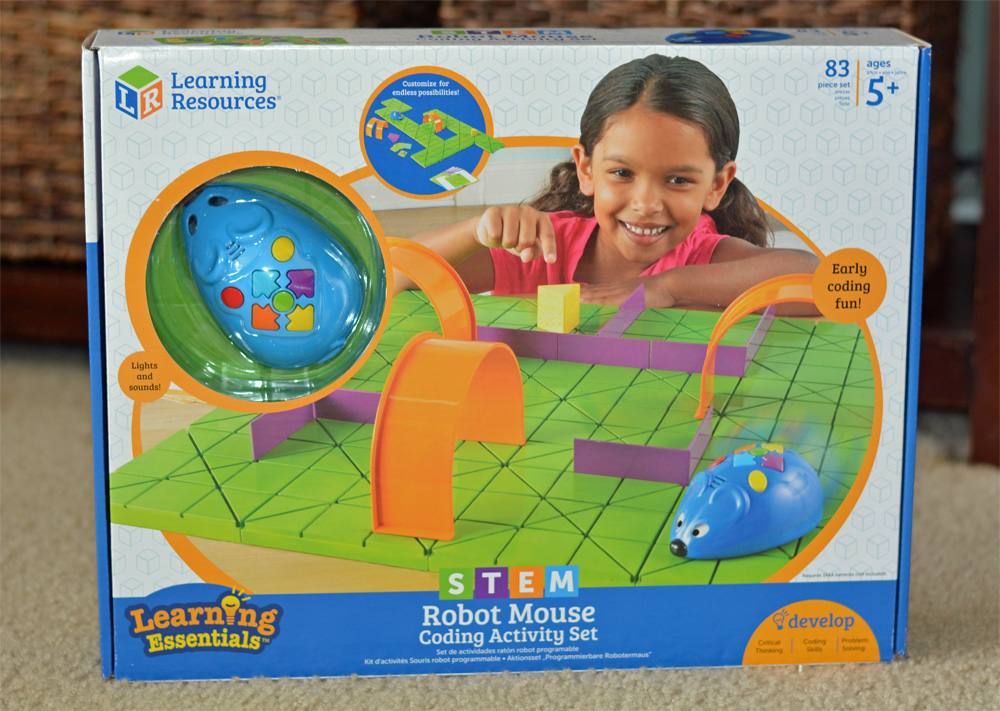 Ever since I got my first computer back in middle school, I have been interested in coding. I remember when the internet was still young, and websites looked absolutely horrible (even at the professional level) and the summer I spent learning how to code in HTML. I'm pretty sure it was some band website I made for my online friends, but the knowledge I learned that summer was invaluable in my life. It wasn't the learning of the code itself, but rather the understanding of how coding works. I would go to websites, inspect their pages and then use that knowledge to build my own code. When I won a full ride to college during a computer programming competition, it was this knowledge of understanding obscure code that helped me win. This is still a very valuable way to code, but what we're now finding is that we can introduce these mechanics at a much younger age, usually hidden within games. I was given the chance to review one such product, the STEM Robot Mouse Coding Activity Set. If you're read my previous posts about kids and tech, you'll know I am a staunch supporter of responsible tech from a young age. Even though my son is still under the age range for the product, I wanted to see how these products teach "code" and if they are a viable option to introduce early.

The STEM Robot Mouse Coding Activity Set, upon first glance, can be a little confusing to someone not familiar with how coding works. You'll be presented with a bunch of green squares that interlock together, some bridge like contraptions, walls, and a mechanical mouse with buttons on top. If you attack this like I did, you'll be a little confused (even understanding code), so read the provided instructions. What you'll find is that the activity set actually revolves around setting up challenges of sorts for the players to navigate. As you'll see in the images below, activity cards are provided that tell you how to set up the activity. Once the course is setup with the mouse at the start and the cheese at the end, you'll help your child determine the best path to take to the cheese. When determining the path to take, you can use arrow cards that will plot out the correct path. By placing them next to each other in a row, your child is effectively writing "code" that will tell the mouse how to move to the cheese. Even if your child does something incorrectly when writing their code, let it happen. Don't correct them. This is critical and a natural progression in understanding coding. Once their code is "written" with the arrow cards, your child will then program the robotic mouse to take the moves they have written and then watch as it moves along it's predetermined path. This is coding in it's most basic form, and when things go wrong, your child will see it and in some cases, may even anticipate it. It then falls on them to go back to the code portion of the project, amend it, and then re-program the mouse to perform the new moves.


The setups you can create really range from overly simplistic to incredibly difficult. You will always start your child off at the beginning of the cards until they understand what is being asked of them. As you progress through the cards, you can also determine if they are writing "good code." What I mean by this is that there are always two ways to write code. Most people that code can write something that will get the job done. It's the coders who write it well and in the least amount of convoluted steps that win the day. Your child can fall into one of those categories as well with this activity. Take for instance a setup that has two correct paths to the cheese. Your child may pick either and their mouse will make it to the cheese, making their "code" correct. But the path that actually requires the least amount of moves could be considered the "more correct" path. This is just something to consider as you watch your child learn with each course you setup. The activities start out very simple, so teach good coding early so by the time they get to the later setups, they'll have that understanding built into their logical thinking of how to program the robot. You'll be surprised by what sticks when learning something of this nature. 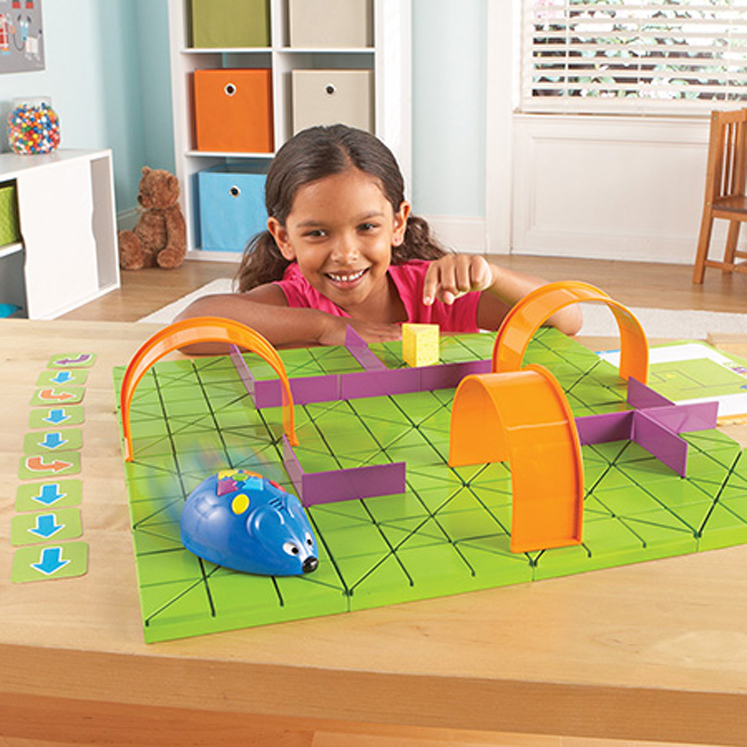 The only negative I can really think of with this product is that the mouse sometimes deviates from course and won't hit the cheese head on if handled a little roughly at the start of this run. Since you're programming absolute values into a course, the robot will only do what he is told. If you place him a little off center, you may find that he'll take a turn a little too wide and move off course. This isn't that big of a deal as he'll usually end up where he needs to go, but there is a sound that occurs when the mouse's nose hits the cheese, and if he doesn't hit it directly, it won't happen. A minor gripe for an otherwise fun activity set for kids.

My son is still too young to really understand the coding mechanics present here, but he still had a good time playing with it. We had to walk him through each step, but as you'll see in the video below, he enjoyed programming the mouse and then watching him move on his path. I fully expect to bring this game out when he's a little older and able to play it proper and I recommend the same to other parents who want to instill a love of coding early in their kid's lives. Coding is something that is becoming fundamental to employees lives. Even non technical individuals with jobs that don't involve coding are now being required to at least understand it. You can't go wrong with introducing this early in a kid's lifetime. And besides, they'll have a lot of fun learning about it anyways.