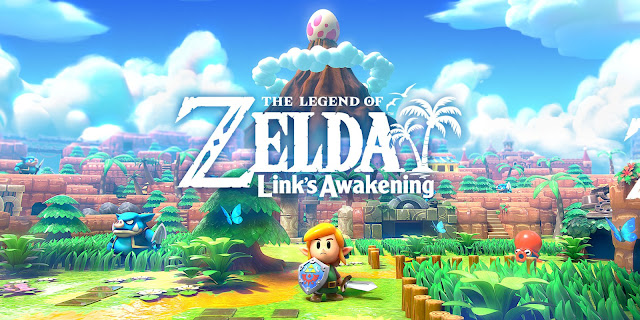 The Legend of Zelda is a series that has been near and dear to a lot of video games fan's hearts for decades. I remember playing the original on the NES in the late 80's when I finally got my first video game console. Since that time, Link and his games have gotten more and more complex. With each iteration of the game, mechanics are added and graphics are improved to give us such masterpieces as Ocarina of Time and Breath of the Wild. The Zelda of the 80s/90s is not the same type of game that you would play today...until now. The Legend of Zelda: Link's Awakening is a re-make of a beloved Nintendo Gameboy game from 1993. This isn't a re-imagining either, it's literally the same game with a beautiful coat of paint and some much needed quality of life improvements. With the influx of holiday games coming out in late 2019, does Link's Awakening have enough to warrant a purchase? Let's find out.

While this is certainly not a deep narrative game, there is a plot in Link's Awakening. Link awakens on an island where two friendly inhabitants have tended to his wounds. He is tasked with finding his sword down by the beach, where he meets a talking owl and then it's off to the races. The owl will be your quest giver of sorts and send you off to your missions for the foreseeable future. The first of these missions has you traveling north through a moblin infested forest where the game will introduce you to combat and traversal culminating in you tackling the world's first dungeon. You'll repeat these steps throughout the game as you unlock new areas and take down bigger and more complex dungeons, but overall, this is the flow of the story. More and more of the world will be made clear, and what the heck is that giant egg on the mountain? The lighthearted story will progress you through the game and answer all of the questions you might have.

The story isn't very deep, but you have to remember, this was a Gameboy game. Just because the story/narrative isn't particularly engaging, that doesn't mean the characters aren't. Side characters such as the woman in town who keeps chain chomps as pets or the old man who is so shy he can only talk to you via telephones work to add life to a game that is just overflowing with charm. The colorful world and characters you meet more than make up for the lack of a truly deep narrative, but you wouldn't be faulted for wishing there was more. We have been spoiled by Zelda games recently. 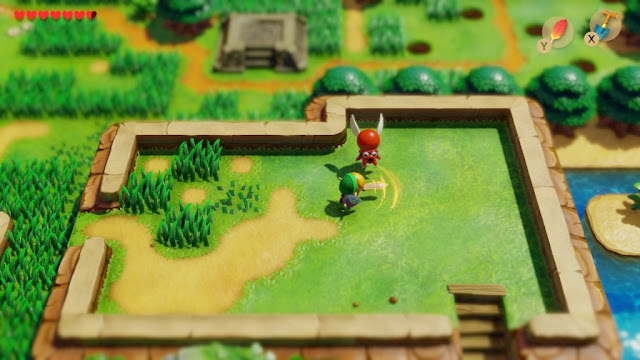 While the story may be light, the gameplay most certainly is not. The gameplay is what you are here for and it's even better than it was on the Gameboy. As previously mentioned, you begin the game on an island where you have lost your sword and shield. Once you regain them, you head out on your adventure, but you'll soon notice that areas of the world are blocked. There are holes in the ground you can't jump over and boulders you can't move. Keep all of these in mind, because as you tackle each of the games many dungeons, you'll unlock skills you can equip to handle these nuisances, thereby opening up more of the map to your exploration.

If you played A Link Between Worlds on the Nintendo 3DS, you'll already have a good feel for how the combat in Link's Awakening works. It's a 3D world, with a top down look, where you'll swing your sword with face buttons and use items equipped to your quick menu buttons to handle trickier enemies. Like in all Zelda games, you have hearts for life that you'll increase through heart containers you'll find in the world and regaining health is as simple as collecting heats from fallen foes or cut plants. It's all standard fare and if you were a fan of it in other games, you're going to love it here just as much.

Exploring the world is such a joy because of the aforementioned charm that just seems to ooze from every dungeon and villager you meet. This is the perfect bite size game to play before bed, or as I'll get to in a little, introduce Zelda to the little ones.

One look at Link's Awakening and you'll immediately be impressed by it's visuals. The world and the characters you see on screen are all found in the original game, they have just been brought to life with HD visuals that pop. The fading around the edges of the screen gives a very surreal feeling to the world and the colors really stand out, especially on the 4k QLED TV I played on. If you played this game previously on the Gameboy, there is enough here on the graphics front to warrant another playthrough.

One thing that may or may not be related to the graphics though is the performance. The game has sudden and confusing FPS drops. A lot of sites have recently talked about it and I experienced it as well. When you enter or leave a building and a transition takes place, the frames per second (FPS) drops drastically. It usually stables itself after a second or two but it can be very jarring. I can see this getting fixed in the future through a patch and it doesn't hinder the enjoyment of the game, but it's certainly something to bring up in a review. 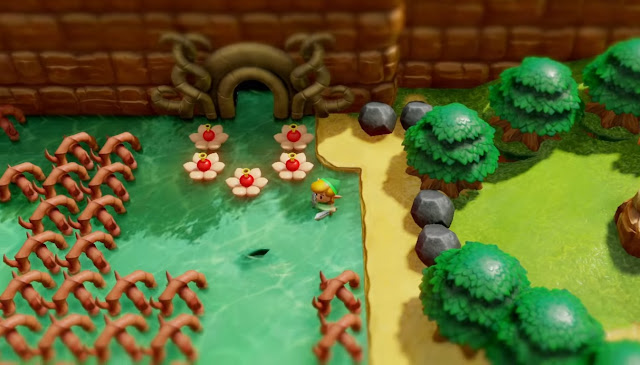 Absolutely. If you have kids in your household that have shown an interest in gaming, this is a great introduction. The game itself is pretty easy, especially for someone who has spent almost three decades playing the series. Young kids without the hand eye coordination needed for more advanced games will find a lot to love her. The world is charming and cartoony with the only violence being fantasy monsters blowing up in a puff of smoke when you attack them.

The game can be a little obtuse at times in where you need to go or what you need to do when you get there, but there are plenty of guides online that can help. But, most likely, you and the kids will be able to figure it out by exploring and seeing where it leads you.

If the kids aren't quite old enough to play by themselves or they can't read the quest text, don't fret. This is also a great game to play with young kids in the room. The chain chomps and silly enemies are a hit in our household and the lack of blood or any serious violence allows you to game while the kids are still awake.

Overall, if you have young kids who want to get into gaming, this is a great jumping on point.

The Legend of Zelda: Link's Awakening is a fantastic game that incorporates nostalgia with timeless gameplay and a beautiful aesthetic. Small technical problems like FPS drops don't hinder the experience much and the young kids in your house will find the perfect game to spend their allocated screen time playing. If you're searching for a deep, story driven Zelda, you may be left wanting but the gameplay and overall charm is more than enough to make up for a lackluster narrative. Link's Awakening comes highly recommended and will be a mainstay on my Switch console. I have a feeling this game is going to be under a lot of Christmas trees this holiday season.

*Review copy of the game was provided by Nintendo, but all thoughts and opinions on the game are my own.
at 3:26 PM