When the topic of nursery was first brought up between my wife and I, there was a little disagreement.  You see, I'm a huge Star Wars fan and immediately thought of all of the possibilities involved.  My wife on the other hand, is a huge Harry Potter fan (and a teacher to boot so she is all about reading.)  While I don't disagree that a Harry Potter nursery would be awesome, I firmly stood by my Star Wars idea and eventually won her over after taking a quick trip to etsy.com to show her the possibilities.

For the nursery, we wanted to go with Star Wars but a baby themed version.  Lego Star Wars immediately came up but was shot down because that is more toddler or up appropriate, not an infant.  After looking on Etsy, we found a ton of items that we eventually purchased and I'll document them below with pictures of the finished product.  I also included links to everything I could remember where we got them from.  Feel free to check them out if you're interested in doing something similar with your nursery. 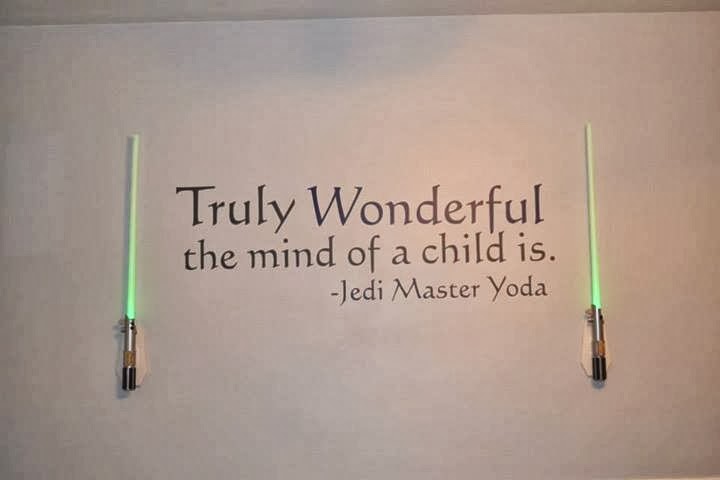 The first thing we wanted was a center piece of the room, something that would go above the crib and sort of be the main thing you would look at when you took stock of the room.  For this, we took a quote from the new trilogy that Yoda says, "Truly wonderful the mind of a child is."  We found a place that sold wall vinyl decals on etsy and then put up two Uncle Milton Star Wars Lightsaber Room Lights to frame the quote.  This is positioned directly above the crib in the room. 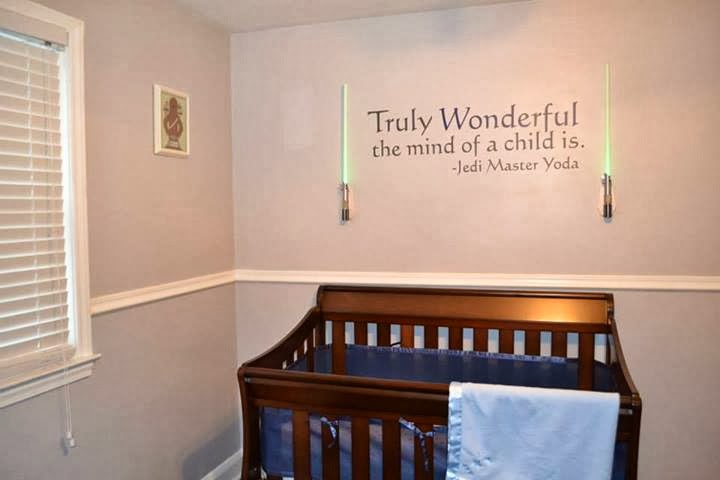 The next thing we were looking to add to the room was a mobile, but something that was from the Star Wars universe.  This proved impossible.  Anything we found was either incredibly expensive or barely related to Star Wars and was only space related.  We lucked out when browsing Etsy and found a woman in Greece who could make mobiles from yarn and ship it relatively cheap.  The entire process cost about 60-70 bucks including shipping and the result (seen below) was awesome.  The design we came up with was planets from the SW universe (Coruscant, Tattoine, Endor, etc.) along with an X-Wing.  The final product turned out great and Jack loves looking at it while being changed. 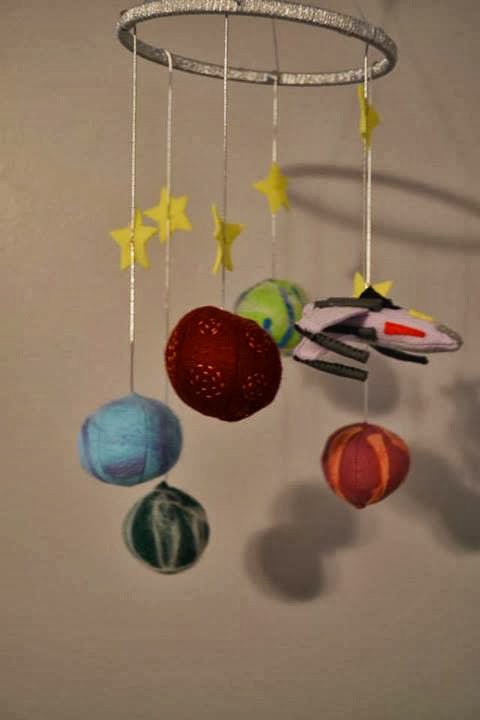 Now that we had two big pieces, we started working on the smaller stuff, namely decorations for the walls. For this, I found a page on etsy, RosyHuesArt, that had some awesome prints of baby SW characters.  We framed these and placed them on the walls around the changing area (with the mobile) and throughout the room. 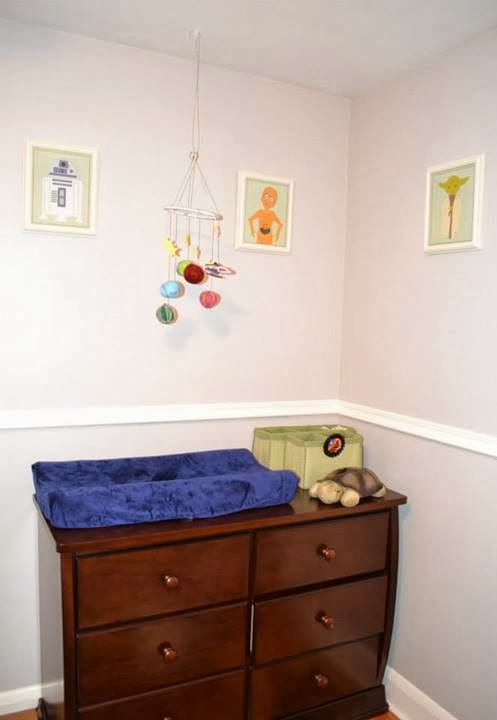 Another piece of art we found online was a really cool version of "Where The Wild Things Are" but with a Star Wars twist. 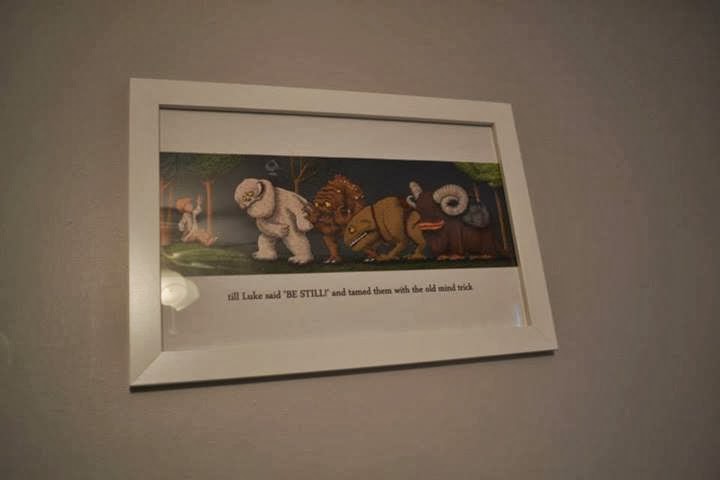 We also found some really awesome light switch and extension outlet covers from an Etsy story called Idillard.  This was found towards the end of our project but added a really cool touch to the room.  They aren't exactly baby star wars themed, but they are nice nonetheless and look awesome in the room.  Here are the product pictures. 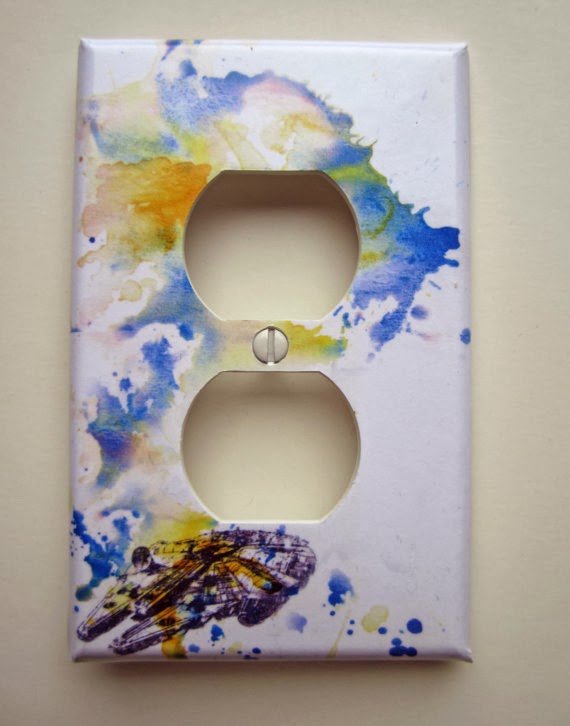 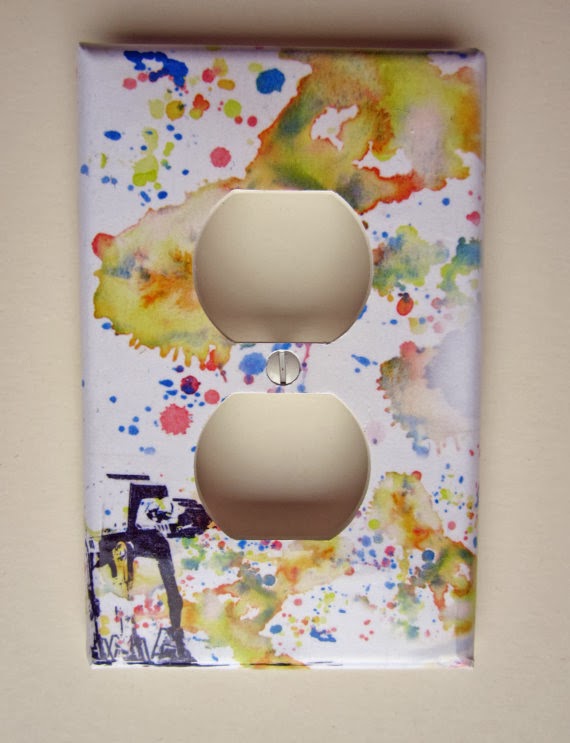 The last section of the room to be completed was the glider area.  For this we just found random Star Wars novelty items and other baby stuff that people gave us during the shower.  In the following picture you'll see a couple Star Wars products we purchased ourselves.  These include a Boba Fett lamp, Darth Vader themed Mr Potato Head, R2D2 Plush, Jawa Plush, and a Jedi Mickey Mouse (my personal favorite of the bunch.) 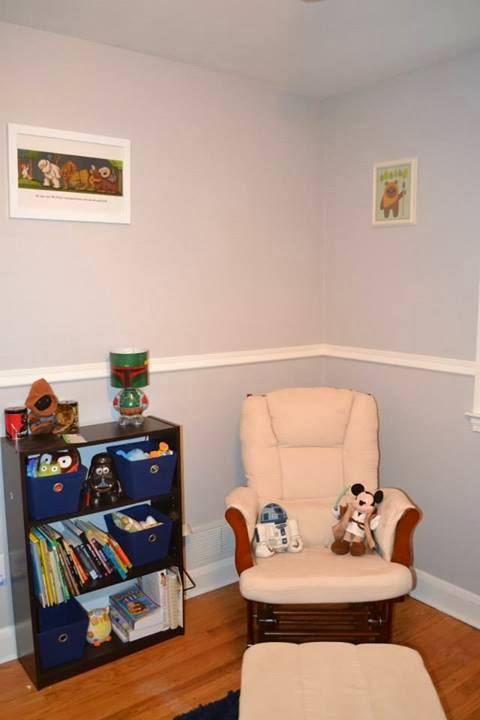 All in all, I'm extremely pleased with how the room turned out.  We didn't have a lot of money to make something extravagant but by working with items created by people on Etsy and some random toys and items found on Amazon.com we were able to make a really nice nursery for a nerd to be.  Now, I just need to make sure he actually grows up liking Star Wars - but let's be honest, that's not going to be very difficult.
at 9:56 AM