Adrian Peterson: The Monster Who Beats a Child Bloody 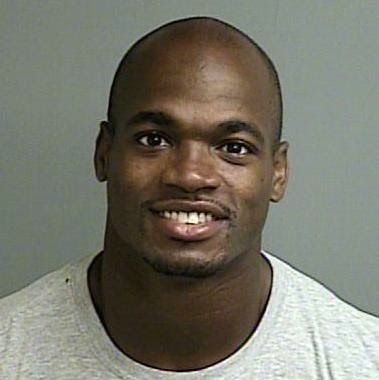 Over the weekend Adrian Peterson, professional football player for the Minnesota Vikings, was arrested for child abuse.  The Vikings deactivated him so he couldn't play in Sunday's game and a lot of people took to the internet to A) find out what happened and B) show outrage over exactly what took place.  I was one of those who took to Twitter and was disgusted with the news.  What I found, though, was that a lot of people were actually defending this behavior and much worse, claiming that they use it themselves.  I'll get to that in a minute. In case you weren't aware, this is what happened...

The incident that Peterson was arrested for actually took place in May of 2014.  Peterson's son apparently pushed another child off of a motorcycle video game of some sort and Peterson decided that his child needed to be disciplined.  The method of punishment was something that is apparently used often in the south (judging by the number of people coming out to defend Peterson) called "whooping".  The child fetches a firm but flexible stick (shown in the image to the right) and the parent proceeds to whip the child with the stick as a form of punishment.

A lot of people seem to be coming out on social media defending Peterson because "this was done to me and I turned out alright."  When I hear this, I wonder if the people actually saw the injuries Peterson's son ended up with.  The image to the left was taken one week after the incident took place.  One. Week.  Let that sink in.  If the injuries look this bad after a week, how bad were they on the actual day of the incident?  The wounds would have had to be open and bloody for them to end up looking like this a week later.  And let's not forget, this is a child we're talking about.  A defenseless 4
year old who authorities said had wounds on his hand when he was trying to ward off blows from his father.  The child even had a lacerated scrotum from the force of the blows which caused the stick to wrap around the child's leg and cut the scrotum.  That is just disgusting.  A father is meant to protect his child from harm, not be the cause of it.  The child even went on to say that he feared his father (and I use the term father loosely) would punch him in his face or take him to his whooping room.  Yes, the man has a room where he likes to do his whooping on his innocent children.

If you are going out on social media and trying to justify this behavior, you are a bad person.  It is never ok to harm a child and just because you "turned out alright" is not a reason.  A lot of people are claiming that this method of punishment is never used to this extreme.  That makes it slightly better, but that's like saying someone was shot in the arm and not the face.  You aren't teaching your child discipline.  You are teaching them to fear you, use aggression when it's not needed, and hide things or choose to not confide in you when they need your guidance because of fear of reprisal.  The fact that you are using a weapon against your defenseless child is evidence enough that you did not.  In my eyes, you are just as much a monster.  These are harsh words, but I believe them down to my core.  This is not an argument for/against spanking.  I don't believe in spanking, but I know some parents who do.  If you feel that is how you should discipline your child then so be it.  I am not calling that type of parent a monster.  I may disagree with parenting methods, but that's all.  This, on the other hand, is so much worse than a simple spanking.  This is using a weapon against your child.  Either you are a coward or a monster or more likely you are both to have to use a weapon against your child and draw blood.

Ray Rice was kicked off the Ravens for beating his wife and banned indefinitely from the NFL (as he should have been.)  I hope the NFL and the Minnesota Vikings do the right thing and kick this monster off of the team and ban him from the NFL indefinitely until he is able to get some help for the anger issues he most definitely has to work through.  Your first thought should not be to whip your child bloody for being overly aggressive in wanting to play a video game.  There are hundreds of other approaches you could have taken, but instead you went right to the form of punishment that would draw blood, leave marks, and ultimately mess this child up.  You are a monster Adrian Peterson and you shouldn't be allowed to have children much less be around them without some supervision.
at 7:58 AM