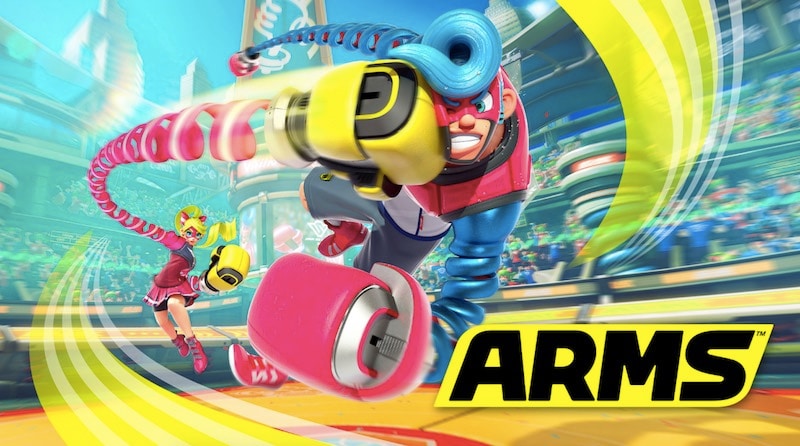 Fighting games on Nintendo consoles have been around for as long as I can remember. My first was Mike Tyson’s Punchout back on the Nintendo Entertainment System (NES) and it was a classic! Many old enough to remember playing it will likely think fondly of the game, but there were also many others on the Nintendo consoles over the years. Street Fighter was huge on the SNES and Super Smash Bros. continues to be a mainstay in the fighting game scene. With the release of the Nintendo Switch, it was announced that a new fighting game would be making it’s debut early in it's lifecycle. One that was a little sillier than others that have come in the past but equally fun and strategic. That game was ARMS. I’ve had ARMS for about two weeks now and with it’s release tomorrow, I thought I’d put down into words exactly what it is and if this game should take up space on your families Nintendo Switch.

At it’s core, ARMS is a fighting game. ARMS’ base mode will have you taking part in a “Grand Prix” event where you pick a fighter and then are tasked to best other fighters in a circuit style games list. This is all par for the course style gameplay for a fighting game, but where ARMS veers off the normal path has to do with it’s main gameplay mechanic, the fighters "arms". Each fighter (minus the one who has springy hair) has arms that sort of create springs and allow them to throw them vast distances. It’s not instantaneous though, the arms travel fairly slowly and hitting enemies requires strategy and correct timing.

Each fighter also wears gloves on their arms that perform a certain task. These “gloves” come in three flavors, light, medium, and heavy and each have pros and cons that lend heavily to the strategy portion of the gameplay. Equipping your character with light gloves will allow them to punch quicker and land strikes faster, but at the expense of not being able to block incoming medium or heavy punches with your fists. When equal weight gloves hit in the air, it cancels out the punch. If a heavy glove hits a lighter glove though, it bats it out of the way and continues on it’s course towards the other player. Throw in a jump button and a dodge button, and you can see how these fights can get a little crazy. Plus, the unlockable arms you can get for each character tend to have some sort of defining feature which will have you balancing pros and cons (do you want the better curving arm or do you want to stick with the boomerang?) On it’s surface, ARMS looks like it would be a pretty straightforward, no frills fighter. It’s not until you really start playing and seeing it’s intricacies that the true strategy comes out.

Speaking of strategy, characters matter. With 10 characters to choose from at ARMS launch, you’ll be selecting not only on looks but on what abilities these characters have. Each character has their own abilities which can easily turn the tide in a battle if used properly. For instance, Spring Man (one of the games most widely recognized characters due to him being punched in the face on the cover) has an ability that allows his charge after dash to stop all forward momentum of opponent arms. This move allows openings to be formed and is critical when playing online against others. Master Mummy, on the other hand, has an ability that lets him heal himself whenever he is blocking. Finding (and remembering) the abilities of the characters is key to knowing what character will be best in a situation where you’re going up against skilled players. These skilled players can most likely be found when playing online, but training in the single player is key as well.

As you play through the game's many modes, you'll be unlocking coins along the way. These coins allow you to participate in a time event that has you punching items as they cross the screen in the hopes of unlocking new arms for your character. it's a neat progression gameplay mechanic that I found myself looking forward to every time I earned enough coins to enter the mode. With numerous arms available for each character, you'll be unlocking and collecting for a while before you are close to owning everything!

If you want to enjoy ARMS single player, that is totally fine. There are single player modes that will allow you to take advantage of all gameplay mechanics and enjoy most of what the game has to offer. The true challenge, and longevity of ARMS, will come through multiplayer matches. You have a couple options to truly enjoy multiplayer gameplay. You can do couch play where you and up to three friends connect to the console and duke it out (there are 1v1 and 2v2 modes available) or you could be really brave and take your ARMS skill online. Playing online isn’t for the faint of heart and I wouldn’t recommend doing so until you have at least played some of the single player content and unlocked a few new ARMS to equip on your characters. The other human players you’ll encounter online are a vicious lot who want nothing more than to destroy your character in glorious fashion. I decided to test the waters a little too soon at first and was promptly shut down with my lack of experience. That’s ok though, I wasn’t deterred. I decided to check out the game’s tutorial and play some new characters in single player mode to get better and before I knew it, I was holding my own online. Online is where the game is going to shine post release. As more and more people pick up the game and head online, the community will flourish and you’ll be matched up with a wide range of skill sets. But, if that’s not for you, there is always single player and couch multiplayer with some buds or your kids.

ARMS is a great addition to the Nintendo Switch family. It’s unique enough that the gameplay you are getting hasn’t been done before, but at the same time is familiar enough to fighting game vets that they’ll be right at home in this new environment. Kids will also love the game for it’s quirky graphics and silly sense of humor. The violence is Saturday Morning Cartoon level with just two characters boxing with no blood or death. The tutorial mode is perfect for little ones to understand the basics before going into single player and taking on the computer. You can even set up tutorials where the computer doesn’t punch to get a feel for how the game works. All in all, this is a great game for any age.

If your sole purpose for playing is to play single player content, you should be warned that the game may be a little thin. The gameplay is excellent and the aesthetic is unique, but this is a game that will truly shine through it’s multiplayer. A weekend game night with the family would be a perfect match for ARMS, as would a Friday night beers and games event with some pals. ARMS has enough going for it to warrant a purchase if you own a Nintendo Switch in your home.