Introducing Your Kid to the Legacy of Zelda 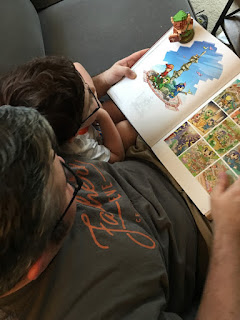 With video games, it’s always a tricky endeavor to determine when is best to introduce your children to them. Ask one person and they’ll say you need to wait until they are school age but if you ask another, they’ll tell you their kid has been a master of the tablet since the day they came out of the womb. The correct answer is that you need to decide for yourself. My son has been enjoying video games for a little while now and while he doesn’t get free reign to play anything he wants, we’ll let him play Mario Kart from time to time and he has actually become semi decent, oddly enough. You know your kid best and can determine if they can handle whatever video games you have. If you have made the decision to let them enjoy video games, I have a suggestion for a good starter game/console you could check out.

Nintendo recently sent over some neat Zelda items for my family to check out and I thought it would be as good a time as any to introduce my son to the legacy that is Zelda. Our first exercise, learn about the past. Thankfully, Nintendo sent us the “The Legend of Zelda: Art & Artifacts” book from Dark Horse that details in images the 30 year history of the Legend of Zelda. My son loved flipping through the pages and checking out the different art work and behind the scenes images that they compiled. He asked some questions, like “why does that guy have one eye?” and made commends like, “Oh look! It’s Zelda!” Overall, it was a great way to take a trip down memory lane while also showing off the many locations and characters of previous Zelda games. Plus, having a sweet 8 bit Zelda amiibo along for the ride really made my son's day.


If you have a Wii U or a Nintendo 3DS (or even the fabled mini NES that came out last year), there are many older Zelda games that you can get access to and introduce to your kids. My son is still pretty young to fully experience the gameplay of Zelda, but if your kid is a little older (maybe around 6 or so?) they could easily navigate through the  older games in the series. The Ocarina of Time has always been a personal favorite (up until recently when I played Breath of the Wild...but more on that shortly) and if you have to pick one to start with, you can't go wrong there. If you want to truly go classic Zelda though, the originals from the NES are your best bet. That's what got me interested in the series from a young age and I'm sure it'll have the same effect on anyone else who checks it out for the first time.

Zelda has come a long way though. Looking at the games mentioned above, you'll see common themes, a structured story, and really only one way to beat the game; the way the director intended. That all changes when we start to talk about the new entry in the series, "Zelda: The Breath of the Wild" for the Nintendo Switch. To say this game is anything less than a masterpiece in the gaming world would be selling it short. It really doesn't matter what age you are, there is something here for all ages and play styles. The ability to just take off in one direction in the world and find a dozen things to do always left me with a sense of wonder that was rarely seen in other video games. I have put in about 80 hours of playtime into Zelda thus far, and I'm still not done enjoying it nor done seeing everything it has to offer. There is a lot of game here, and if you have ever had a passing interest in the series, you can't go wrong.

But, enough about me. What about your kids? I can honestly say that Zelda is the perfect game for kids. My son, as mentioned earlier, is still too young for deep gameplay, but even he enjoyed watching me find shrines in the wilderness and hunt down rare horses and ingredients. One of his favorite things is watching me fail to cook a meal and end up with "dubious food." For some reason, he thought that was the most hilarious thing and even started calling my wife's cooking dubious...careful, son. If your kids are a little older than mine is, you'll find that this is a safe way to let them enjoy a video game without the fear of overt violence or blood. There is no cussing, no blood, and violence is about the same as you'd see on a cartoon over the weekend. Dealings with NPCs (non playable characters) in the world has humorous dialogue that always stays innocent and to the point. The game is open ended enough that you could let your child play and just see what they find. Exploration is the name of the game with Breath of the Wild and you'll be surprised by just how much exploration can be done. 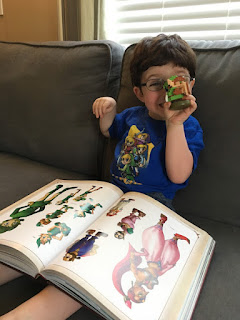 Zelda, in our house, has become a favorite evening activity. We actually also used it to help my son with potty training oddly enough. Rewards come in many shapes and sizes and the one my son really took to was being allowed to have a couple minutes of Zelda time after successful attempts. I'm not saying that it'll work with every kid, but it worked with ours. Jack is already asking to be Link for Halloween so Zelda has definitely made an impact on his young mind. And that's what Nintendo does best. They make characters the whole family loves while also wrapping those fan favorites around quality games everyone can enjoy. If you don't already own a Nintendo Switch, I can't recommend it enough if you have young ones in the house. With Mario, Splatoon, and ARMS right around the corner, and with Mario Kart 8 Deluxe already out there (check out my review of Mario Kart here) there will be no shortage of family friendly games you can play with your kids.

Have you introduced your kids to Zelda yet? Do you play games with your kids? Let me know in the comments and share any stories you may have about introducing them. Video games can be a wonderful thing when enjoyed in moderation and Zelda: The Breath of the Wild is one of the best introductions you can have to current gen, family friendly excellence in gaming.