My son may be out of diapers, but the memory remains of the woes of diaper rash. One does not become a “Poop Master” overnight (you get creative with titles/rewards when potty training.) There are years of diapers and diaper related issues you must contend with. One such issue, which every parent can relate to, is diaper rash. Oh diaper rash, the bane of the baby years and the destroyer of peace in an otherwise semi-peaceful household. In an effort to bring an end to diaper rash, I am teaming up with Life of Dad to do this sponsored post with Boudreaux’s Butt Paste®. #KickingRash is something every parent can get on board with, but I wanted to let it be known that Boudreaux was actually our go to solution for diaper rash long before this sponsored post was ever thought up. I have been singing their praises for years, so when given the opportunity to do it some more with a fun twist, I was instantly on board.

So why do we like Boudreaux’s Butt Paste® so much? Well, to put it simply, it works. As a man with the mind of a teenager, I’m not going to lie; I was instantly drawn to a product with “butt paste” in the name. But after a couple uses with my son, it was plain to see that this paste was far superior to any other diaper rash creams on the market. If you compare Boudreaux’s Butt Paste® to other creams out there, the difference is instantly visible. The thickness of the product creates a barrier that starts relieving diaper rash from the first use. A cranky baby with a rash goes from hulking out to peaceful in minutes and you can focus on other important things, like how to hide your gaming controllers from a kid who seems to have an almost psychic ability of finding things they aren’t supposed to have.

Our days of using Boudreaux’s Butt Paste® are on hold (at least until we decide to have another kid) but that didn’t stop me from trying to think of uses outside of the diaper. Since it helps to get rid of diaper rash so well, maybe it would work with a few other things that cause discomfort in day to day life. With that thought fresh in my mind, I figured I would see how it works on the grey hair brought about by having kids. Kids cause diaper rash and this works well on that, so why wouldn’t it work on grey hair brought about by kids and the stress they bring? 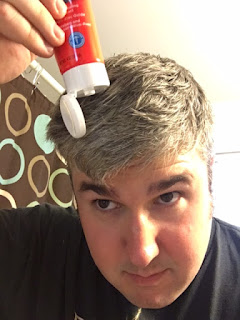 Alright, so that’s a big “no” to the grey hair fix. They aren’t kidding when they say this stuff is thick and thankfully my wife has some expensive shampoo that gets it out of hair. Anyways, onto experiment number 2…

So, if kids cause diaper rash, and the Butt Paste™ doesn’t help damage done to others…maybe it’ll help damage currently in the process of being done. With that thinking, I head to my son’s room where he is spending some quality time “reading.” There is just one problem to my son reading (besides the fact that he can’t…), he likes to cause a tornado of book carnage so he has them all available at any given moment. With my trusty tube of Boudreaux’s Butt Paste® in hand, I responded to the Butt Signal and applied some paste to a messy situation. Let’s see how this plays out. 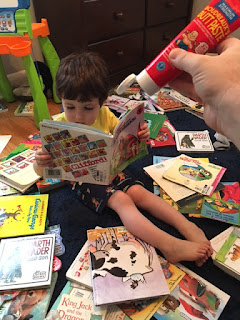 Yeah, that’s another big “no” to cleanup duty. Instead of working on contact like it does with diaper rashes, it kind of just made a bigger mess and a grumpy three year old. I do not recommend this approach.

Boudreaux’s Butt Paste® may work miracles on your baby’s butt, but it doesn’t do anything for grey hair or messes caused by curious three year olds. That’s ok though. When you make a product that is perfectly suited for one issue, it’s ok if it doesn’t work on other…unrelated issues.

If you have a little one in your home that still uses diapers, diaper rash isn’t just a possibility, it’s a given. It will happen. So be prepared with the best product on the market, Boudreaux’s Butt Paste® Maximum Strength. The solution is formulated with 40% more Zinc Oxide which equates to two times the rash fighting ingredient of the original formula. The product has no dyes, parabens, preservatives, phthalates, and talc so you can rest easy knowing that even though you can barely pronounce those words, it won’t do harm to your baby’s bottom. You can pick up the new 14 oz. jar from all major retailers including Amazon and Target for the MSRP of $16.99. You can find out more information about their products by visiting their website (https://www.ButtPaste.com) or by following them on twitter @ButtPaste.

Boudreaux Butt Paste was a sanity and butt saver when we had our first child. If you haven’t tried it before, give it a shot. You’ll be surprised at just how effective it is vs. the other brands out there on the market. Just remember, this product does one thing and one thing incredibly well – it fights diaper rashes. As much as I try, it’s not going to cure my grey hair.