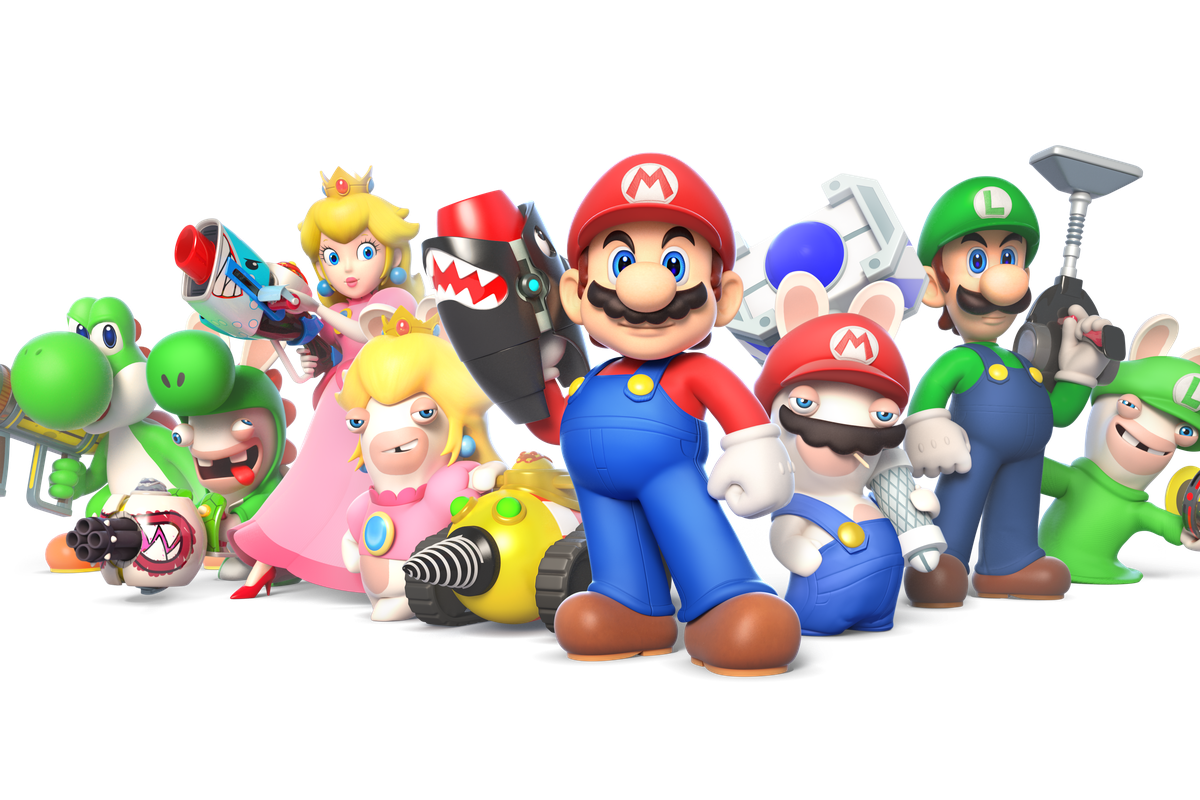 The Nintendo Switch has been on quite a roll recently. It may have started out with only one game for it's early adopters to play (Breath of the Wild), but over the past few months the must have games on the system have been coming in fast. So far this year we've seen Mario Kart, ARMS, Splatoon, and Mario Odyssey is due out later this year. One wild card release that no one really knew anything about was Mario + Rabbids Kingdom Battle. When Ubisoft showed off the game at E3, it took everyone by surprise. Was that Mario with a gun? What the heck are Rabbids doing there? Is this seriously an XCOM style game? Well, after a week with the game, I can answer all of those questions and more as I give my review of Mario + Rabbids Kingdom Battle for the Nintendo Switch.


The game begins with a young Nintendo obsessed scientist who has invented a device that can combine two things together. Shoot the device (which is a set of goggles) at a lamp next to a plant, and you have a plant lamp. It doesn't take long for the Rabbids to make their presence known as they show up in their time machine to wreak havoc on the girls room. One thing leads to another and one of the Rabbids steals the goggles and begins combining other Rabbids with the Mario decor in the room. Chaos ensues until the creatures themselves end up in the Mushroom Kingdom and continue their rampage. Mario meets up with Rabbid versions of Luigi and Peach and they set out to find the creature causing all of the mayhem (the one with the goggles) and see about righting the wrongs he has caused throughout the kingdom.

The story is very lighthearted and is genuinely comical at times. You may have rolled your eyes at a crossover story with Rabbids and Mario but it actually works quite wells. Rabbid Peach is a personal favorite of the bunch as she is obsessed with taking selfies every step of the journey and is not too fond of proper Peach and constantly rolls her eyes at her. The story is really just there to push along the game and doesn't involve any non kid friendly moments, so if you're a parent wondering if your kid can play based on story alone, they can.


If you've never played an XCOM or Strategy RPG before, the gameplay in Mario + Rabbids will be completely new to you. For starters, there are multiple worlds you'll be navigating through real time. You can move around, collect coins, and solve minor puzzles to access areas that were previously inaccessible (either due to missing skills or story progression.) In your travels around the world, you'll eventually come across a battle area. When you enter, your three characters (which you can pick and choose throughout the journey) will line up at the start of the arena and the battle begins.

Each battle area has multiple obstacles and pipes that you can use to hide or traverse around the arena. Walls, which you can hide behind to block enemy attacks, have multiple heights which block varying degrees of damage. If you hide behind a full wall, you'll block attacks 100% of the time (from an attacked aiming at you from the other side of the wall), while smaller walls will only block damage 50% of the time. Enemies also gain these advantages so you will find yourself needing to maneuver yourself so that you can attack them from their flanks while also protecting yours. You can also use your fellow teammates to do a jump move that can drastically increase your range of movement. All of these mechanics combine into creating an almost puzzle like scenario as you try to position your troops in ways that not only allow them to attack the enemy, but protect themselves from enemy attacks (which is a lot tougher than it sounds.)

Each turn, you're able to do a couple things that are really unique to the game. You can move, shoot, and play a unique skill each turn (if it's off cooldown.) The thing that really sets this game apart is that your movement can actually be turned into a weapon. If you run into an enemy, you'll do a slide attack that will damage the enemy. Through upgrades, you can also jump off teammates and land on someone's head to do damage as well. When you get really good at the game, you could effectively land 3 separate hits (slide attack, jump attack, and then weapon attack) to multiple opponents (through skill upgrades) and there is nothing more satisfying than setting up combos with other team members.

The game can get very tough at times, almost too tough. As you progress through worlds, you'll take on multiple battles each level. After the first battle, you usually don't get any health back unless you find a healing item which may or may not exist. There is an "easy" mode that you can trigger that will replenish your health and give you an extra pool if you are seriously running headfirst into a wall nonstop, but other than that, it's just your skills against the computer. But each level is a sort of puzzle like I said earlier and it may take a couple failures to learn how to get past each obstacle.

There are multiple types of enemies too that each have their own strengths and weaknesses. In the beginning, you'll go up against standard Rabbids that will shoot and maneuver just like you do. Eventually, they'll start using advanced strategies and introducing new enemy types. One such enemy, a giant Rabbid carrying around a stone slab, will charge at you every time you damage them. If they catch you, they will slam the slab on you doing massive damage. Positioning and timing of attacks is key to neutralizing their onslaught. Medics also make an appearance in the second world and will need to be focused on early unless you want them to constantly heal their teammates after you do damage. The enemies introduced and the obstacles like the chain chomp always keep things interesting and make you react quickly to ever changing scenarios on the world.

The one thing that truly makes the gameplay shine is the characters skills and their weapons. Each battle (and sometimes finding items in the world) will net you upgrade points. There is a skill tree you can dump these points into to build a character how you want them to play. My Mario character is a solid run and gunner while Luigi likes to stand back and snipe from the shadows. I'm saving up a ton of my points to make Rabbid Peach's heal ability more powerful, but I have to forego some of her other skills in the meantime. These decisions will make your team the powerhouse you want, and if you don't like one characters abilities, feel free to us someone else. There are 8 possible characters (Mario, Luigi, Peach, Yoshi, and Rabbid versions of each of those) and each have their own unique skills list. Throw in weapons with special effects that can burn, stop a character in their tracks, and bounce them around the arena and you truly have some neat ways to build out your team.


Mario + Rabbids Kingdom Battle is rated Everyone 10+. That seems like a pretty fair score based on the fact that the game does get very tough and younger gamers may have some challenges with it. Plus, depending on your feelings of Mario using a gun (even if it's really like a particle blaster) the age range could be higher than usual for some parents. The visuals and humor in the game is very tongue in cheek with lots of underwear jokes (thank the Rabbids for that) and overall silly encounters. Kids who have actively played previous Mario games will find a lot to love here and most likely will leave with a greater appreciation of the Ubisoft created Rabbid creatures. They sound silly, but they do steal the show from time to time, especially Rabbid Peach.


Mario + Rabbids Kingdom Battles surprised the heck out of me. I was expecting a mediocre crossover game, but what I got was a game that has a ton of strategy involved while also keeping the humor you know and love from these two universes. The difficulty spikes do get intense from time to time and require strategy to complete, but with the addition of the easy mode, gamers of all ages should be able to navigate the game without too much frustration. The upgrade path and weapon choices add in a pretty good customization option that allows you to build a team the way you want and the extra battles in each zone you can come back to will leave completionists with ton to do after finishing a world. If you own a Switch, this is a solid title to add to your system. It might not be a system seller like Breath of the Wild, but it was never intended to be. Instead, it's a nice addition to an otherwise stellar stable of games that the Switch has.
at 11:19 AM