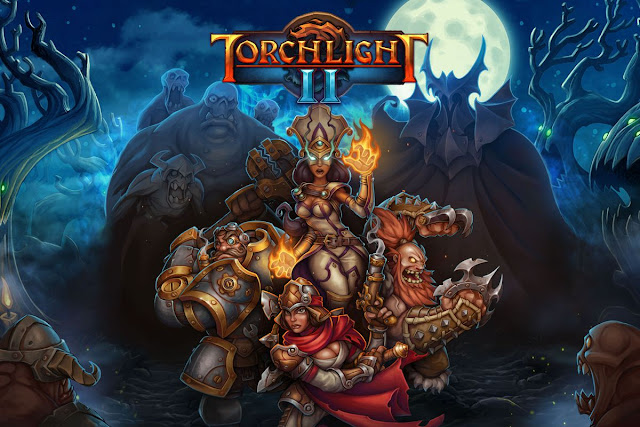 ARPGs have been a pretty big hit this generation on consoles. Diablo 3 released a few years ago and still has a very active fan base. Path of Exiles recently released for both the PS4 and the Xbox One and continued the trend of good couch loot based games. Torchlight 2 is another actiong RPG but one that released years ago for the PC. The game was a pretty big hit on the PC, especially with it's discounted price and great loot system. It wasn't as full featured or story driven as Diablo 3 was, but it didn't need to be. The console version was rumored but never came to fruition. Thankfully, that has been remedied and the game can now be played on all next gen consoles including the Nintendo Switch. After spending a few days with the game and having put an insane amount of time in the previous PC versions, how does this hold up after so much time has passed since it's original release. Let's find out.

Torchlight 2 begins shortly after the events of the first Torchlight game. It's fine if you haven't played it before, it's not required. The intro cutscene will set the stage where the Alchemist from the first game has seemingly become the villain and ransacked through towns. It's up to you to track him down and right the wrongs he has committed. Your first task though, before you head out to fight endless mobs, is to make a character.  When selecting a character, much like in other ARPGs, you'll pick a class. The options are Berseker (melee focused damage dealer), Engineer (tank that can have robots), Embermage (mage...), and Outlaw (Rogue class). Depending on the class you select will determine what skills you get access to, but all armor and weapons are available to all classes as long as you meet the skill criteria, but more on that later. You have one more character option to select and that is your traveling companion. This is a pet character and can be anything from an owl to a wolf to a honey badger. There's a ton of options and if you're feeling extra goofy and bought the Nintendo Switch version, you can even use a unicorn that shoots sparkles out whenever it moves. I ended up making an embermage (I am always partial to mage classes in these games) and selected a panther as my companion and then I was on my way.

You'll start the game with one skill and just bare bones armor. As you take out mobs they will drop items and money that you can then equip. Equipping items are always locked behind one of two things, a level or a skill criteria. If you want to wear something early, just spec into it with your skills. The skills are your typical RPG elements with strength, agility, focus, and vitality, each one specifically focused towards a playstyle. As an embermage, I went with focus with a secondary in vitality and that served me well. Focus increased my mana pool and gave me access to armor that better suited my playstyle with spell buffs and damage increases. Each level, you'll be given a couple points to throw in to whatever bucket you want and also the ability to put points into unique spells that your character can use. These spells are locked behind levels, but once available, you just need a skill point to unlock and then to upgrade you sink additional skill points into it. If you make a mistake and pick something you don't like, you can visit an NPC in town and have them refund you one of your last 3 skills purchased. The system works well and you're always looking for the next skill to unlock.

While the PC version used numbers and a long bar of hotkeys to use spells, your spells will be mapped to buttons on your controller. All are available and you can mix and match what each does. By default, potions are on the R1/R2 buttons on the PS4 controller, but you can mess with them and use whatever works best for you. I found the system to be incredibly easy to use and very similar to how others have handled controller support in the past. Controls won't be a problem and you'll easily knock off whatever spells you need to do.

The companion I mentioned earlier also plays a role in combat by helping you take down enemies. One additional feature that can't be skipped over is the ability for the pet to take your unwanted items back to town to sell and then bring you the money back, allowing you to keep killing enemies without having to trek back yourself. While it sounds like a pretty mundane thing, it's amazing. You can also feed your pet fish that you caught at numerous water holes throughout the lands to turn them into a random assortment of monsters for a time to do extra damage and get abilities. It's a fun little addition. 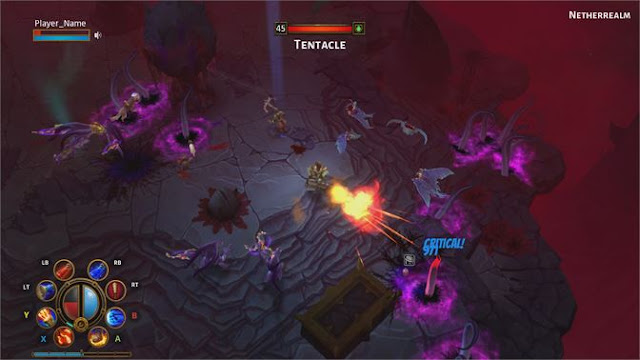 As this is a 7 year old game, you're not going to find anything truly breathtaking here, but it doesn't look bad either. It's cartoon aesthetic still looks good, even after all of these years. Playing the game on both the Nintendo Switch and the PS4, I did notice some lag when there was a really big fight and at one point the game actually froze for a couple seconds leading me to believe it was going to crash. This only happened once though (surprisingly on the PS4) and it didn't come up after that. It could have been a fluke, but worth mentioning.

As I mentioned earlier, you're not really coming to a Torchlight game for the story. It's there, and there is a plot, but it's mainly to propel you along your path in order to continue blowing up the bad guys and exploring every nook and cranny of the map. The gameplay takes center stage in a Torchlight game, and it's good, just don't expect a fully feature story.

Yes. While Diablo 3 is pretty dark and layers on the gore heavily in some areas, Torchlight 2 tones it down to a much softer approach. It's cartoony, you're killing bad guys, but thanks to some options you can turn off blood and reduce the overall impact. Most enemies are monsters, although there are some humans. In the end, you're going to have to make a decision about what you let your kids play. This is definitely a step up from a Mario Kart style game, but it's not nearly as violent as most games like it.

Where this game will truly shine is with slightly older kids. This is a great game to introduce them to the joys of action rpgs and while there is no couch co-op (which is very disappointing), you can play with others online. So, if you have multiple consoles or the kids have friends who play - they'll find a lot of enjoyment here. 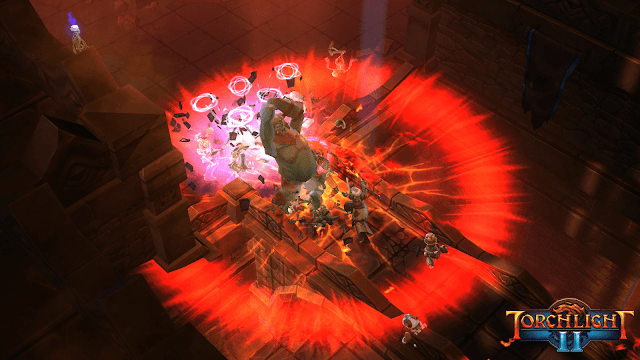 Torchlight 2 was and remains a great ARPG game to play whether it be on the PC or now the consoles. You can't go wrong with either option, just decide on where you are most comfortable. The PC will have mods and a pretty big community already, but you can't discount the comfort from playing this game on your couch. With the ability to make your own character, level up skills, and party with your furry (or scaly, single horned, creepy, feathered, etc.) companion, you'll be able to sink an ungodly amount of time into this game. It comes highly recommended, even after all of these years. I really wish the game had couch co-op, and I know that will turn a lot of people off, but it does allow online 4 player games.

Age hasn't slowed Torchlight 2 down and being able to play on the consoles is just the shot of adrenaline the series needed to get us excited for the future release of Torchlight Frontiers.

*Nintendo Switch review code provided by the publisher but all thoughts on the game are my own.
at 12:51 PM