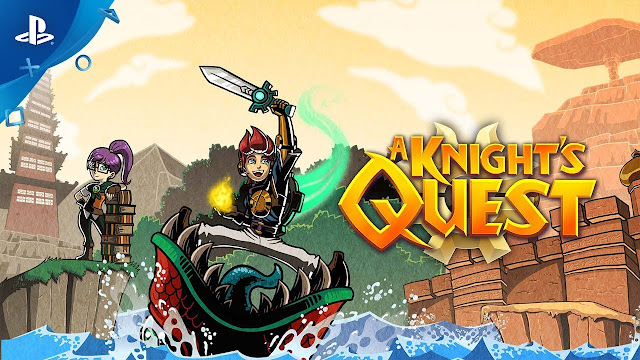 If there was ever a game that could have benefited from a larger budget, A Knight's Quest is it. Upon booting up the game for the first time, you wouldn't be remiss to immediately remember the days of Zelda on the N64. The style, the look, the gameplay; it's all there but on a next gen system. Is there enough here to warrant a $25 purchase or is this just another example of a cash grab on your nostalgia?

The game begins with the player being introduced to Rusty. Rusty makes a big mistake...like, really big. He brings about the end of the known world and is tasked with setting things right. By traveling across numerous lands to conquer the demon hordes he let out, Rusty must use special skills and the help of his pals to right his mistakes. It's a pretty standard story but where it shines is in it's dialogue. I remember one scene where a villager was talking about a "big ass" crystal that appeared in the sky. It felt refreshing to see dialogue that I would use in day to day life vs. typical high fantasy/family friendly speak. It's not found in every conversation, but most are very lighthearted and a welcome change to typical stuffy dialogue in other games like this.

There is no spoken words in the game, everything is read through text bubbles or interactions with others. Characters will grunt or make sounds, but that's to be expected. Think Zelda: Ocarina of Time where a character would make a noise (a grunt, a squeal, etc.) and then they would chat with you. A Knight's Quest wears it's inspiration on it's sleeves and it's all the better for it.

I was surprised by the level of story present in A Knight's Quest. With the obvious low budget that Sky 9 games were afforded for the title, it was a welcome surprise to see some generally laughable moments and a pretty engaging story that kept me invested in Rusty's escapades. 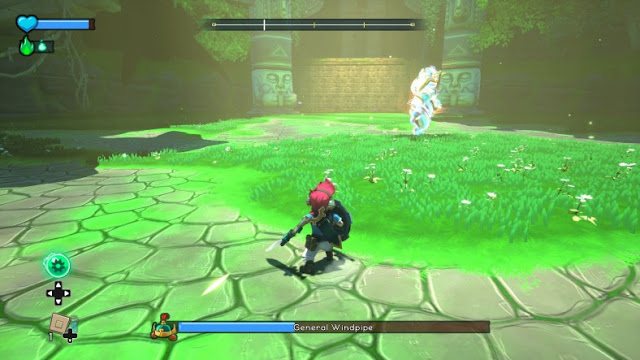 If I had to sum up the gameplay in A Knight's Quest, it would be Ocarina of Time meets Ratchet and Clank. It is very obvious that Zelda is an inspiration for this game, but the gliding mechanics and traversal through platforming is very familiar to fans of the Ratchet and Clank series, especially the newer ones on PS3 and onwards. It's never quite as fluid as those games, but it does a nice job of nailing the aesthetic. You can target enemies and circle strafe like in Zelda games and the combat is very similar. One odd choice though is the amount of times you need to attack enemies to take them down. Early in the game, some enemies took up to 20 hits to take down, and these were basic enemies. Over time and as you unlock skills, it gets better, but odd design choices like this pop up from time to time throughout the game that can take you out of the fun.

Exploration around the world is another example of something that is really enjoyable until it's not. Making your way through the world, you'll have a blast jumping from ledges and navigating around waterfalls. Doing rail slides and jumping from one to another is both fun and visually appealing. But eventually, you're going to lost and have to do a ton of platforming needlessly just to get somewhere that you're not supposed to be at yet. Then you'll spend more time navigating somewhere else only to find out that the game doesn't want you to be there quite yet. It gets very frustrating and I found myself doing a ton of needless backtracking when I really just wanted to advance the story. It's unfortunate because it's an otherwise fun game that has some truly fun platforming at times, it just tends to get lost in monotony and repetitious backtracking. 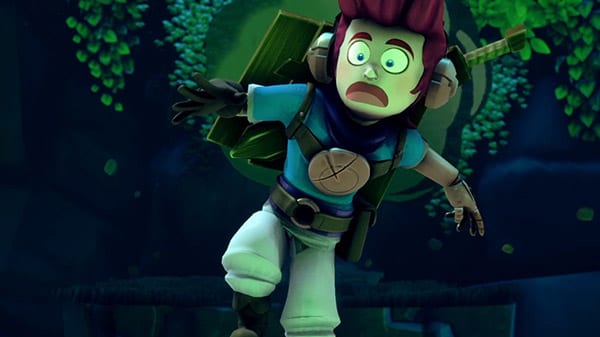 This is going to be a weird section of the review because it's really all over the place. I'll try to break it down as best as I can. The graphics in this game look beautiful for it being a budget title. Coming in at only 25 bucks, you wouldn't expect to see some of the landscapes this game has. I was shocked by it at first. Walking into town and seeing the giant castle with the floating crystals in the sky was a really strong first impression for the game. It's not until you begin to see the concessions that were made in other areas of the game to accommodate others.

The game may look nice, but weird bugs constantly pop up. For starters, in the early parts of the game you'll see your character jump from a ledge as he falls down to water below. When this happens, it's an in game cutscene but I saw two of the main character's model making the fall. The first went straight down as you would see if you jumped from a ledge in the game. The other did what you see in the screenshot above. After landing on the ground, you're greeted to a panoramic view of the town with your character in view. I tried to skip the scene and hit a button on my controller but it didn't skip, yet I did hear the jump animation sound play in the background. As this cutscene played out, I hit other buttons and could hear my character doing stuff in the background, although on screen he was standing still. When I was finally given control after the cutscene ended, I was many feet away from where I needed to be and apparently broke a few boxes in between. Weird oversights like this are everywhere in this game and like I said in the opening paragraph, with more QA or a bigger budget, this game could have really been something special.

The single most jarring thing I noticed in the game though was the audio. It cuts out, it gets loud, it vanishes when you turn corners. It's a completely disjointed experience. The first time this really stood out was when you wash up on shore outside of town and there are torches near the beach. Walking near one of these torches sounds like the gates of hell have opened and fiery magma is pouring out into your ear. Step two feet away and it's gone. One step back, hellfire! This is just one example, but it's rampant throughout the game. It's really unfortunate because this seems like something that could have been ironed out if it had more time in the oven and a slightly higher budget. But, 25 bucks is 25 bucks and these things have to be pointed out even for budget titles, especially when there are games retailing for $20 or lower with much less technical issues. 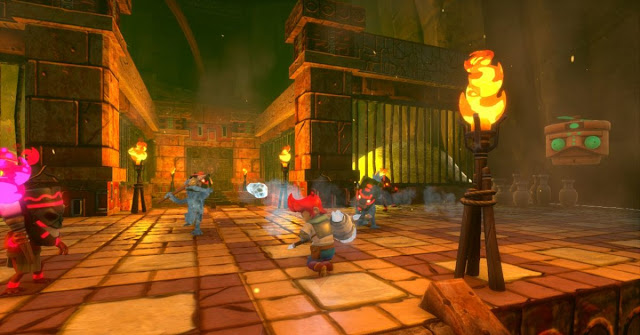 The game itself is rated T for Teen and I think that is a perfect rating. Sure, younger kids can play the game and enjoy it, but without spoken words it will be incredibly difficult to follow the story. Plus, they might be frustrated with the traversal issues mentioned above.

The humor of the game is ideal for a younger teen and the occasional slang humor is welcome in a game style that typically doesn't have the level of humor A Knight's Quest does.

So, with all of that said above, do I recommend A Knight's Quest? No, I don't. At least, not now. The game has too many issues, some of them glaring, that will take you out of the experience of enjoying the otherwise fun and rewarding gameplay. These are issues that could be fixed and patched in later, so my recommendation would be to either wait for a sale around the holidays or follow the developer Sky 9 to see how the update process goes.

There is a good game under the surface here and you can tell a lot of hard work went into creating this game. It's just unfortunate the technical issues and odd design choices put a damper on the experience quite the way it does. With a very crowded 2019 Q4 and 2020 Q1, I can't see A Knight's Quest taking up much of your gaming time with what is being offered.

*Reviewed on the PS4 with code provided by the publisher
at 10:27 AM