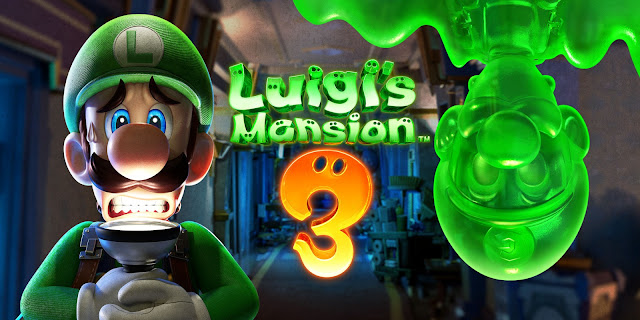 The Nintendo Switch has been nothing if not reliable with it's first party titles since release. Link and Mario have had their time to shine and they both did admirably well, but there are others waiting in the wings for their turn. Next up? Luigi and his anxiety ridden trek through a haunted hotel in Luigi's Mansion 3. Fans of the originals will know what to expect on it's surface, but is there enough here to differentiate it from it's predecessors and does the new coat of paint on the new system add that extra layer of polish? Let's find out.

The story in Luigi's Mansion 3 starts off innocent enough. The plumber brothers and their pal Peach (along with her toad entourage) are invited by someone named Helen Gravely to stay for free at her hotel. We don't know why our group of friends were given this honor, but apparently they don't ask too many questions or check Yelp reviews because during their first night the hotel instantly turns super spooky and ghosts capture everyone but Luigi. Come on guys, haven't you read the horror stories about Airbnb places?

Luigi, his ghost dog, and his overwhelming anxiety is then tasked with tracking down his friends and figuring out how to get out of this macabre hotel. Along the way, Luigi will gain his trusty vacuum for sucking up ghosts (which he's had in other games, so he conveniently brought that along with him), rescue Professor E. Gadd and his marvelous ghost hunting innovations, and use them to both battle ghosts and solve environmental puzzles. The story is incredibly lighthearted and the ghosts are never overly scary, which is what you would expect from a Nintendo title.

The story is easy enough for a young child to follow along, but clever and funny enough for an adult to enjoy. The ghosts you'll encounter range from the typical to hilarious. Boss battles are usually against a named or unique ghost that involves some sort of puzzle mechanic to beat it. The ghosts themselves will run from you, try to scare you, and do a number of things to keep the action going and the mechanics fresh. I can honestly say that I was interested from the start in Luigi's journey and never once did I falter because of anything the story lacked. It never fails to be charming and is a great motivator to keep progressing in the game. You don't need any prior history with the series to enjoy the story, so if that was a hangup you were having, toss it aside. The story will work for veterans and newbies alike. 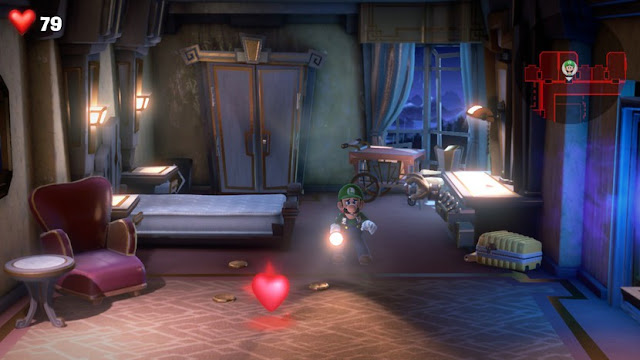 If the story is what got you interested in Luigi's Mansion 3 to begin with then the gameplay is what will keep you coming back. There is something cathartic about using a vacuum cleaner to suck up objects, money, and ghosts while exploring a haunted hotel. The vacuum cleaner tool you have will be used throughout the game to interact with puzzles and combat ghosts but it serves as a sort of swiss army knife for Luigi. Along with the simple sucking it can do, it can also work as a flashlight and a sort of UV light that can detect hidden objects.

Combat in Luigi's Mansion 3 is very similar to how it was in previous entries. If this is your first Luigi's Mansion, you basically need to suck up ghosts into your vacuum's backpack, but in order to do so you have to usually stun them. This can be done by flashing your flashlight at them which allows them to be sucked up. Sometimes they may be carrying an item that prevents a good latch with the vacuum, so you need to find a way to remove it from their possession. Other ghosts might not react to the flashlight, but need to be hit with sometime in the world which would involve you sucking up something in the environment, shooting it at the ghost, and then sucking them up when they are dazed. This all plays into the light puzzle aspect of the combat and it always seems that new ghosts bring something unique to each encounter. You'll never feel overwhelmed with the mechanics, but they change frequently enough so that you don't get bored.

While the backpack is most certainly used for combat encounters, it's also your main tool with puzzles. The puzzles in Luigi's Mansion are mainly environmental, meaning that you will be manipulating things in the environment to advance to the next level, find a secret, or open the way to the boss. For the first couple hours of the game, the puzzles are very straight forward; use your vacuum to blast out air and move something, make something spin, etc. When you unlock the series' newest feature, Gooigi, you'll find that the puzzles get more intricate and...weird. 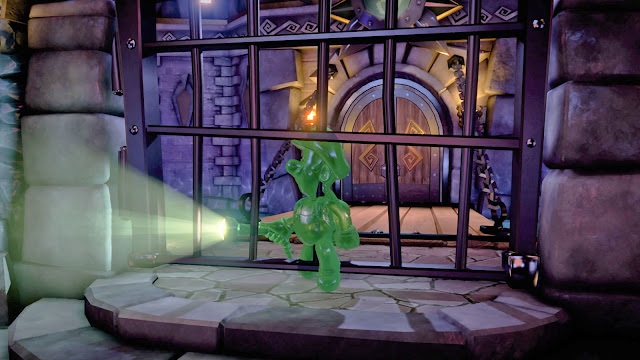 So, what is a Gooigi? A Gooigi is a Goo Luigi that you can take control of to move around the world and access areas that may have been inaccessible to a flesh and blood Luigi. At any point in the game (once you unlock it) you can press a button to create a goo copy of yourself. Luigi will sort of zone out when this occurs unless he was in the process of already doing something, in that case he'll keep doing it but become immovable. You'll take control of Gooigi and be able to pass through gates that have holes in them, go through pipes in the walls, and otherwise access areas that involve a more gooey consistency to access. You will also find areas where you need two things to happen at once. Remember earlier when I said when Gooigi is formed, Luigi continues doing what he was previously doing? That comes into play multiple times when you need to move two levers at the same time or perform other puzzles that would usually take two people to conquer.

Once you unlock Gooigi, you can also invite a friend to control him via the multiplayer portion of the game. This is a fun way to have someone else play the game along with you, but let it be known - frustrations can follow. There were multiple times when I knew what the puzzle needed but my son didn't and what started as a fun game evolved into a game of wits where my son just wanted to "suck up everything" while I tried to complete the objective. Your mileage may vary depending on your child's age and stubbornness, but it's worth mentioning.

Another thing that needs to be brought up is the controls. The game controls wonderfully everywhere except for one spot, and that is aiming the vacuum vertically. The vacuum, once engaged, can be moved horizontally with your controller sticks but if you want to point up or down, you're going to have to use the finicky motion controls of your controller. It's not unbearable, but at times it's very frustrating. I was never at a point where I couldn't eventually get Luigi to aim at what I wanted him to aim at, but oftentimes I found myself battling with the aiming and the camera at the same time, and this went doubly so with boss battles. I wish Nintendo would move away from the motion controls in essential portions of games, but until then at least it's not game breaking. 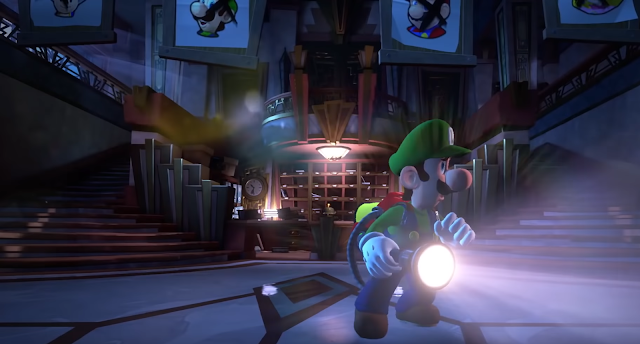 The graphics and overall spooky aesthetic in Luigi's Mansion 3 are great. You can tell the game took everything the Switch had to offer power wise and used it to create a beautiful environment with spooky decor and eerie lighting. Progressing through the game, the walls and ghosts pop with a wide range of color and Luigi's frantic maneuvering of the flashlight creates some really pretty set pieces where ghosts pop out of the shadows. You're not going to get a Crytek level graphics game on the Switch (which we don't need anyways), but for a Nintendo title, this is top notch.

Absolutely, with a caveat. I whole heartedly recommend this game to any parent who wants to get their kid a Switch title for Christmas. I half heartedly recommend this game to any parent who wants to play co-op with their kid. Luigi's Mansion 3 is a wonderful single player experience that can be enjoyed by most ages. You need to be able to read as their isn't any true English in the game (as much as Professor E. Gadd wishes, sookie sookie is not English) and all of the instructions will need to be read. A parent of a younger child can definitely help lead the child to where they need to go and battling ghosts is never outside the realm of possibilities, but this might be best for kids 8 and above or so. In regards to my comment about half heartedly recommending it for co-op, see my earlier story about co-op play with my son. It's possible, but it will try your patience. If you want to play with a friend, spouse, or older child - then you'll be just fine...as long as they aren't one for trolling. 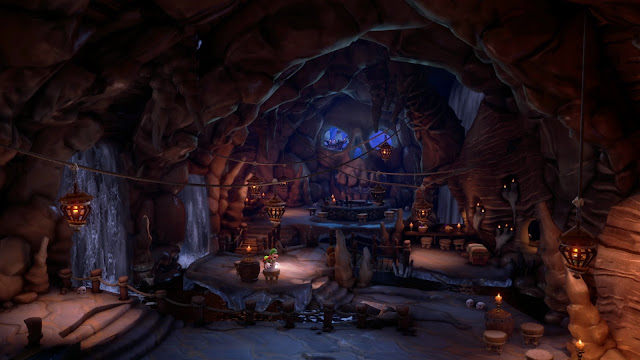 Luigi's Mansion 3 easily sits alongside Mario Odyssey and Breath of the Wild as must own Switch titles. It's a great time to be a Nintendo fan when the company is producing hits like these on a system that isn't trying to break new ground with weird gimmicks. Luigi's Mansion 3 is a return to form for the series and the type of game I want to see more of on the system. It's a very "Nintendo" Nintendo game if that makes sense. Incredible gameplay, a funny light-hearted story, and colorful graphics that can be enjoyed by all ages. The multiplayer is a little hit or miss depending on who you play with and the motion controls can be a bit taxing at times, but it's certainly not enough to bring down this altogether fun experience with the quieter, although certainly not less qualified, "Mario Brother." This is a must play Switch game that will easily be looked back upon as one of the greatest hits of this console generation.


*Review copy of the game was provided by Nintendo, but all thoughts and opinions on the game are my own.
at 2:16 PM