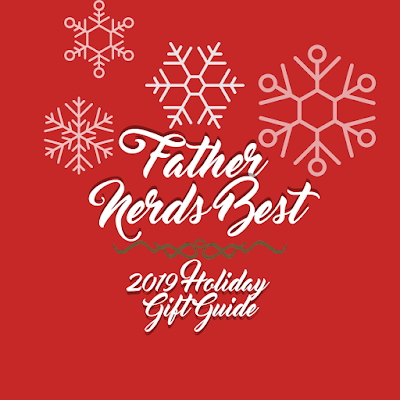 It's that time of the year again. The weather is getting colder, the music is getting merrier, and your bank account is about to get a whole lot smaller. That's right, it's Christmas time and if you have kids like I do, every year is a struggle to decide what to get for them. There's a ton of options out there, but it's hard to know what to get for the little ones, especially if you don't have first hand experience with the product. That's where I come in. The following gift ideas I have first hand knowledge of through playing/using as well as interacting with around my children. You'll find some things for the kids as well as a few bonus adult/big kid items. After each product is a sponsored link to Amazon, so if you plan on buying it, I'd really appreciate the support. Let me know in the comments what you'll be picking up for your kids or if you think I missed a must have for this holiday season! 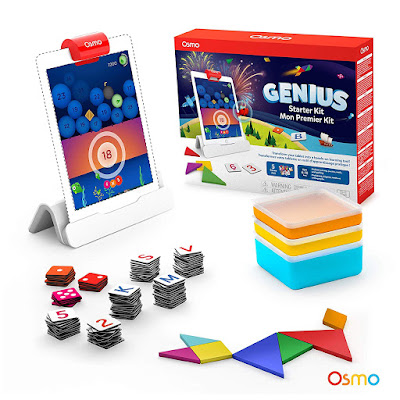 The Osmo Genius Starter Kid for iPad is a neat little toy that parents can enjoy as well. The one caveat, as you can tell by the name, is that you need an iPad to use it. We have an older model at the house that my son uses and it works fine. The thing is over 6 years old at this point, so I'm going to say most will work with it. A little dongle attaches to the top of this toy that has a mirror on it. The mirror helps the camera see in front of the iPad where your child will interact with objects. The app on the iPad might ask them to spell out a word or make a shape with the provided objects and as your kid does it, it's being reflected in the application via the feedback from the camera. It's a really cool tool that truly shows off the learning potential of modern technology. You can also buy some fun accessories like a Hot Wheels set that shows your car on the screen while you place down "boosts" to help your car race faster. You can find this on Amazon for $69.99 as of publication. 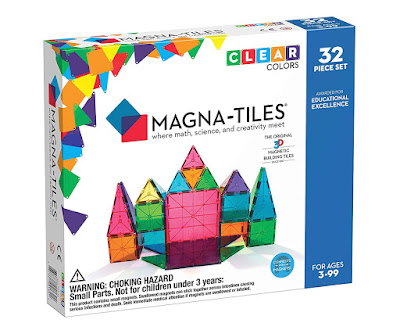 Magna-Tiles have been a main stay at our house for years now. We bought a bunch a few Christmases ago and they have lived in one of those IKEA storage crates, always readily available in the kid's play area. My son didn't really take to them until he was about 4 or 5, but they are safe for 3 and up. Basically, these are little plastic shapes with magnets in them and they work just like blocks do. My son's favorite thing to do is to build space ships with numerous rooms and house his play animals in them but in reality, your imagination is the only limit to the stuff you can build. These come in a range of sizes and can be a little pricey, but they are definitely worth it. The 32 pack pictured above is $49.99 on Amazon as of publication. 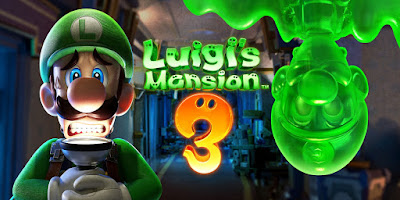 Luigi's Mansion 3 for the Nintendo Switch

If you've been on my site before, you'll know that I review a lot of video games. Luigi's Mansion is actually one of the most recent reviews I've done. If you want an in-depth review of why I loved this game, head on over here to read it. For the short and sweet, this is a must play Nintendo Switch title that kids can enjoy with a friend or alone. It's a new release, so it'll probably set you back about $60, but you might be able to find it cheaper at one of the bigger stores closer to Christmas. It's well worth the price of admission and it'll be a hit this Christmas for sure. 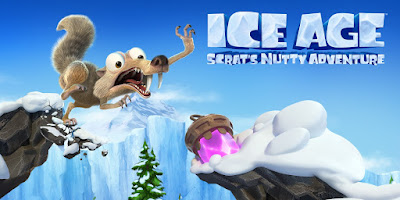 Sticking with the video game theme, Ice Age: Scrat's Nutty Adventure is a fun game that kids will enjoy on all of the major consoles. In the game, you'll play as Scrat, the neurotic nut loving squirrel from the movies as he tries to collect items that closely resemble...you guessed it, nuts. The game is classic in it's approach and it felt a lot like the old school Spyro style games. You'll be dropped into a world with collectibles and environmental hazards and have to make your way to the end while collecting hidden items throughout the level. Scrat can jump, attack, and dodge enemies and kids of all ages should get a laugh either playing or watching an older sibling play. Scrat's Nutty Adventure is on sale for $39.99 as of publication and available on the major consoles. 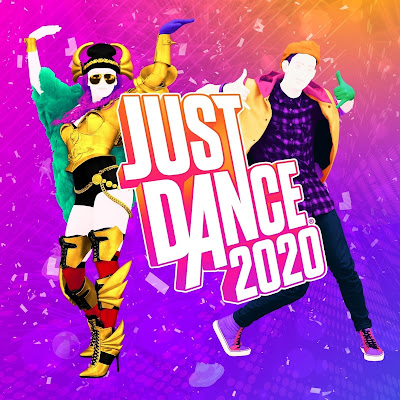 I'll admit, I always scoffed at the Just Dance games as being silly. Who would want to dance in front of their TV to weird characters on screen. Turns out, a lot of people...including my kids. The music in the games are mostly modern with a kids music section included as well. To dance, you can do one of two things. If you own a Playstation camera, you can dance in front of that. If you don't, your phone will work. You'll connect to an app and then dance with it in your hand. The camera is obviously the ideal way to play, but the phone or joycon controller on the switch will do just as well. Kids will love to dance to the songs and they'll even get quite a workout. Move to a few of these songs and you'll be sweating, that's for sure. Just Dance is currently $29.99. 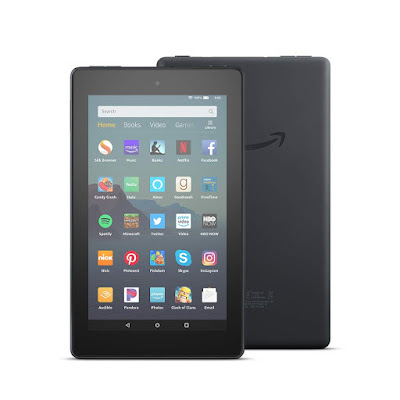 The Fire 7 tablet is too good and too cheap not to recommend it to someone with kids. Normally, it's $49.99, but on Black Friday this was discounted to $29.99. I'm sure it will hit this price again before the holiday season is over. At that price, each kid can have one and treat it however they want. They'll be able to download all of the apps they need, watch movies, play games, etc. With parental controls, you can also determine just how much time they spend on it. It's a solid device at a great price. This won't be the tablet for the adults in the house (look into the Fire 10, iPad, or Samsung tablets for that) but it will be a great kid device.

Pokemon Sword and Shield for the Nintendo Switch

Pokemon is a series most gamers will already be familiar with. Older gamers played it on the original Gameboy back in the day while newer gamers grew up playing it on the Nintendo DS and 3DS. For the first time, a true Pokemon game has been released for a major console (not a handheld) and it's awesome. It doesn't matter how old you are, catching Pokemon, training them, and taking on gym leaders is a cathartic experience and I've already lost about 15 hours into the game so far. It's a great couch game after a long day of work when you just want to unwind. This one is for the kids AND the grown ups.

Pokemon Sword and Shield at Amazon

For the Big Kids 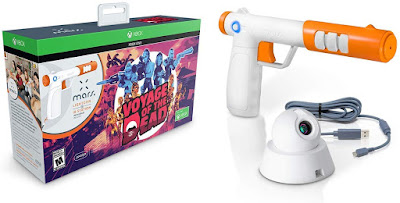 The PDP MARS Light Gun Set is a novel toy that would be a lot of fun on Christmas morning. Think duck hunt, but with modern day tech and graphics. Depending on what set you get, the box will come with one of three games but the others are easily downloaded via the Playstation or Xbox Store. The starter box will come with a gun and a camera that you will point at the TV. It can be a little awkward at first, but once you find a spot for it to go, it works pretty well. I'm curious to see the other games they come out with in the future. Voyage of the Dead and the Buck Hunter game are pretty solid already though. 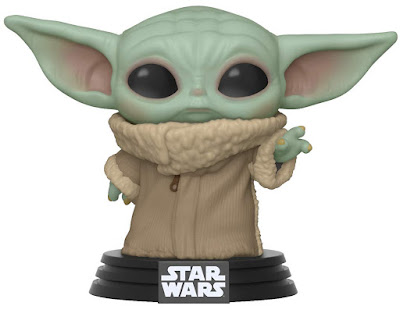 Not much else to say here...if it's Baby Yoda, it's going to be a hit. 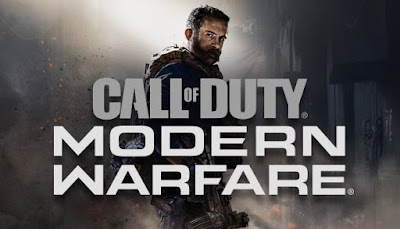 
This one is for the older kids and the adults. Modern Warfare was the game that came out in the late 2000's that revolutionized the first person shooter. Countless hours were spent in multiplayer lobbies with others from across the world as fans were captivated by Infinity Ward and Activision's hit shooter. Fast forward a decade and we have Call of Duty: Modern Warfare. It's not a re-release but a re-imagining. Characters from the original game can be found in this one as well, but it's a completely new game on a new console with incredible graphics. If the adult gamer in your life likes FPS games, this is a no-brainer this holiday season.


Review copies of all video games mentioned were provided by the publishers, but all thoughts and opinions are my own.