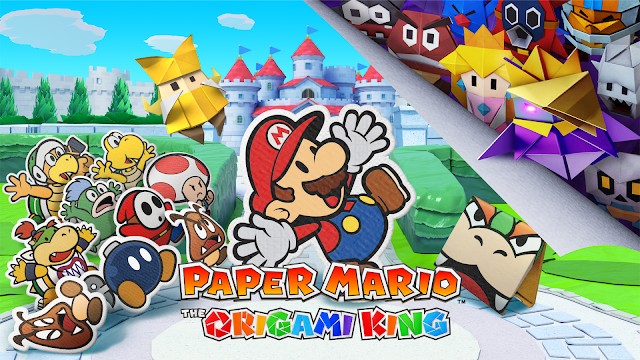 The Paper Mario series has gone through a number of iterations through the years. Starting with Paper Mario on the Nintendo 64, we were introduced to Mario in a new format - paper. Literally the entire world is made of paper including the characters. The games were a hit and the enhancements that were implemented over the years really breathed new life into the series. It's been almost 20 years since the first was released and now Nintendo drops Paper Mario: The Origami King on us. Does it have the same magic of it's predecessors or has this series become paper thin? Let's find out...

Paper Mario: The Origami King starts a festival in which Mario and Luigi show up to. While they were expecting a lot of fanfare and fun, they get empty streets and mysterious happenings. The first of which is Princess Peach looking very much...different, and talking about the need for Mario to be folded and reborn. It's not long after that we are introduced to King Olly and his plan to fold everyone into origami, which turns them into mindless servants of sorts. Thankfully, you have Olivia by your side and after a daring escape and she acts as your knowledge base for all things origami - especially when it comes to King Olly and his plans. What follows next is a crazy adventure that has former enemies becoming allies and hilarious hijinks across the mushroom kingdom.

As you progress through the game, you'll soon be introduced to the completely new battle system. Gone are the old days of just button mashing to get through enemies, with these battles you have to actually think. You'll be placed in the center of a rotating wheel of sorts that has multiple layers. Each layer will have enemies at different spots. The goal is to either align the enemies in a straight line so you can jump on all of their heads or get them in a small group of four close to you so you can hammer them. You also have your items like fireballs and mushrooms that come into play. Initially, this puzzle like battle mechanic starts of fairly simple, but within a few hours you'll be scratching your head trying to decide how to line up the enemies perfectly to do the most damage. Throw in some enemies that can disappear on your and boss battles and you're in for a mind bending battle of skill. 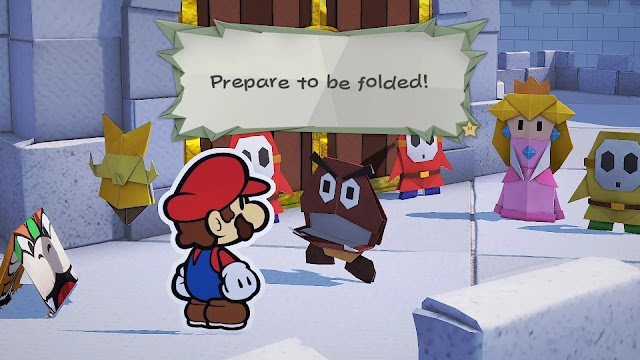 The battle system is going to be hit or miss for some people. I won't lie, there were times when I just wanted to brute force my way through some battles but couldn't because it wouldn't be efficient. When you're in the right state of mind, the battle system is a lot of fun that presents a puzzle like environment to every encounter. When you just want to sit down and lose yourself in a mindless video game, well, that's where The Origami King will lose you. Puzzle fans will love it, especially later in the game when it truly gets difficult. For others, they might fall off before getting to that part. I recommend you look up some gameplay videos of the battle systems ahead of purchasing to see if it's something you'd enjoy doing. Battles aren't as plentiful as a typical JRPG, but they will pop up from time to time.

Exploring the world of Origami King was probably my favorite part of my time reviewing this title. The paper world and it's bright colors and crazy cast of characters was always a good time. Most notably for me was Mario's dance moves he has to perform during a battle. It's not often where I can say I legit laughed out loud, but this was definitely one of those moments.

Another thing the world will have you doing is checking behind every nook and cranny. There's a ton of hidden secrets and toads to collect as you progress through the game. The toads you find will also come to your aid in battle, so it's definitely something you're going to want to do.

The graphics in the game are a treat and utilize the Switch's hardware well. Colors are bright and the world really pops as you navigate the kingdom. No complaints here. It's a Nintendo game, you knew it was going to look nice. 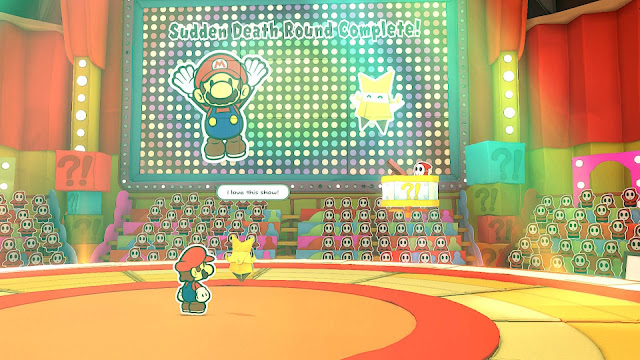 Yes, I think this game is absolutely for kids with one small caveat. The battle system I spoke about earlier is the one thing you need to keep in mind when you are deciding if this is right for your family. The content of the game is great and suitable for all ages. There's nothing overly scary and of course the violence is what you're familiar with - jumping on heads, using big mallets, etc. The battle system and it's puzzle like complexity will be the one thing you need to see if your kid is old enough to handle. As I mentioned above, do some YouTube searches to see if you think it'll be a good fit.

The Paper Mario series has always been a really fun romp through the Mushroom Kingdom from a two dimensional paper perspective. While I wish the combat system was a little more forgiving when I wanted to turn my brain off after a long day of work, it didn't really hinder the fun I had with the title. If you enjoyed previous entries in the series, you're going to love this new adventure. If Paper Mario games were never really your thing, chances are The Origami King isn't going to sway you much in it's direction. Overall, I enjoyed my time with the game and it's a solid addition to an already stellar lineup of games on the Switch.
*Review code provided by Nintendo but all thoughts and opinions are my own
at 3:24 PM